4 reasons why you don’t want to miss Silent Night

We’ve all heard the story about the impromptu truce that brought warring countries together in World War I. Amidst the chaos and bullets whizzing past people’s heads, opposing forces were moved to make peace for one special Christmas celebration. Could there be a better setting for an opera?

Composer Kevin Puts and librettist Mark Campbell went the extra mile when realizing this masterwork. It’s performed in English, German, and French (with a little Italian and Latin thrown in for good measure), is based off of an Oscar-nominated film, and it even won a Pulitzer Prize! But what really makes this opera special is that it’s based on a series of real stories from real people in the trenches of 1914 Belgium. Believe me when I say that you do not want to miss this opera—here’s why:

Whether you are the kind of person who loves opera, only loves well-known opera, or even if you’re an opera newcomer—you’ll love this music. Kevin Puts was able to create a musical world that tells a rich story. As soon as the curtain opens, you hear a tune that you’d expect to experience in a Mozart opera. Opera singers Anna Sørensen and Nikolaus Sprink are in the midst of a performance break into a love song. Suddenly the music stops, and a voice comes over the loud speaker telling the audience that war has broken out. You hear three melodious battle anthems and BANG! A bomb falls and the music and stage erupt into dissonant chaos.

From there the music takes you on an adventure that tells you stories of brotherly love, romantic love, longing, loss, anger, hatred, and human connection.

One of the most amazing things about this opera is that it’s based on a series of true stories from real people on the Western Front during this time period. The characters in the opera (and the 2005 movie it is based on—Joyeux Noël) are narrative inventions to drive the story forward, and in reality, there were a few impromptu truces leading up to this one on Christmas Eve. Nonetheless, this work offers an authentic window into what it must have been like for the people affected by this miraculous event.

#3 The sets, costumes, and acting will leave you in awe

There have been several different productions of this opera since its inception, but this one is particularly clever. If you loved the set for our 2018 production of Moby-Dick, then you will love this set as well—they were both designed by Erhard Rom! You can see into the German, French, and Scottish bunkers because they are all stacked on top of each other. Also the costumes designed by Vita Tzykun (who designed our production of Strauss’ Salome in 2013) are detailed and draw you into what feels like a PBS period drama. On top of all that, it has a cast of top notch singers and actors and an amazing opera chorus. 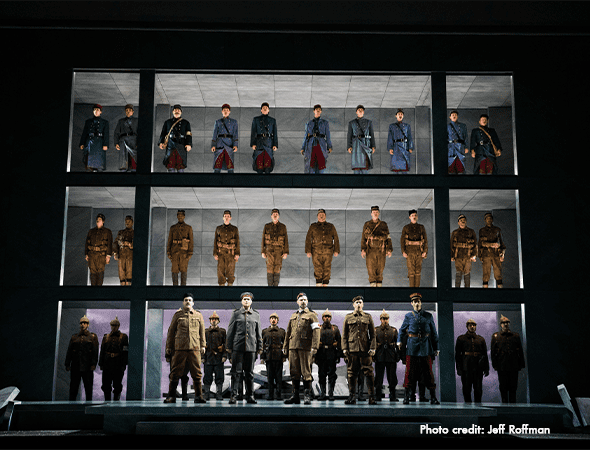 #4 You WILL ugly cry

You’ve been warned. Bring your tissues.

This opera is filled with heart-wrenching moments that are only magnified by the beautiful swells of music. Don’t believe us? Just watch this video that baritone Craig Irvin made of the audience when he performed the role of Lieutenant Horstmayer at the Houston Grand Opera.

The stage is set, and we’re waiting for you to join us at Kevin Puts and Mark Campbell’s Silent Night. Get your tickets here.